Skip to content
Home » Toaster in the Bathub: What Would Happen? 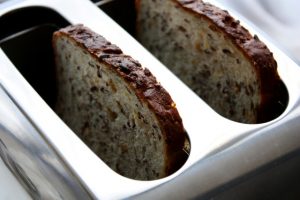 Have you ever wondered what will happen if you drop a toaster in a bathtub? Is it really as lethal as they depict in the movies? Wonder no longer, we are going to answer your questions in this article.

Dropping a toaster in the bathtub can be lethal. This is especially true if the toaster is not grounded properly. Amperage and not voltage is what kills a person. You can be exposed to one million volts of electricity and survive but an amperage of between 5 to 10mA together with a minimum voltage of 60V can kill you.

We’ve all seen that scene in a movie where someone dies from a toaster or other electrical appliance being dropped into a tub full of water. It could be at the hands of Chucky or a freak accident in Wrong Turn but have you ever wondered if this is another narrative that Hollywood has sold us?

Is there actually merit to this whole narrative? Well, in this article, we are going to dig into this and see what’s true and what’s not. The popular TV show Myth Busters actually did an episode to investigate this very assertion to establish its validity. Their findings were quite interesting and I will be sharing some of them in this article.

Let’s look at the science being electrocution. Electricity travels through conductors. For there to be movement from one place to another, there has to be a pathway through which it can travel.

Add some salt in it and its conductive potency increases and by extension, the risk of electrocution. So, based on these factors, we see that the conditions necessary for electrocution are present.

Whether or not it will be fatal if someone was in the tub is down to a number of things. The first is the wiring of the house.

Most bathrooms, especially in modern-day bathrooms are fitted with fail-safes designed to cut off power within milliseconds if an accident happens in the bathroom such as an electrical appliance falling into the water or other abnormal redirection of current.

In such cases, the trip switch of the house mains will take longer to react and someone could be dead by the time it does trip.

This happens in order to prevent fatalities in high-risk areas like the bathroom where wet skin, wet floor or any other water-related hazards can lead to electrocution.

What Happens if You Put a Toaster in a Bathtub?

The Results of Toaster in Water

Studies tested different electrical appliances over and above the toaster. Their findings revealed that a toaster definitely is a very deadly thing if it was dropped into water. The amperage in it is able to kill a person if it were to be dropped into the bathtub.

Can You Put a Toaster in a Bathtub?

Yes, but it’s not a good idea. A toaster is designed to work with dry items. It’s not designed to be submerged in water. You also need to consider that any electrical appliance is going to get damaged if you submerge it in water. So no, you shouldn’t put your toaster in the bathtub or any other body of water.

Is it bad to put a toaster in a bathtub?

It’s not a good idea to put your toaster in the bathtub. The problem is that the wires inside can get wet, and they’re likely to short out. That could result in a fire or electrocution. If you want to clean your toaster, just wipe it down with a damp cloth and dry it thoroughly afterward.

So, it would seem that Hollywood had it right this time. Chucky and Co can get you by dropping the toaster, TV, Hair dryer, Iron or other electrical household appliances.

As a closing note, please don’t try placing a toaster in the bathtub just to experiment. These experiments should always be done by professionals in a controlled environment.