Skip to content
Home » Can you Toast Frozen Bread? 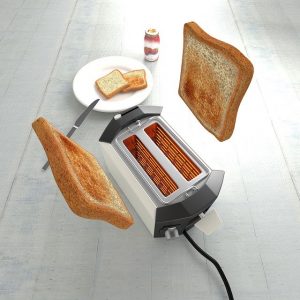 You’ve probably heard the benefits of freezing bread as well as those of toast but can you toast frozen bread? If you’ve never tried this before, this article will help convince you why you should start doing this as soon as possible.

You definitely can toast frozen bread. It doesn’t taste any different but it is much more healthier that eating plain white bread. When you eat frozen and toasted bread, you get the benefit of 39% lower glycemic index (GI).

Bread is a part of our everyday lives and most people eat bread an average of four times per week. Are you aware though that vast amounts of bread are thrown out each day?

Tens of millions of slices of bread are thrown out each day because they have gone stale. Freezing bread is a great way of keeping your bread fresh.

It also has an added benefit that we are going to get in to in this article. When you eat white bread, it can quickly raise insulin levels in your blood giving you a high.

The problem is that the spikes soon become dips and you start feeling lethargic. This is why a lot of athletes who require a constant and steady supply of energy stay away from white bread and opt for healthier alternatives.

When you freeze then toast it, this figure goes to 39%. Freezing bread will also allow it to keep fresh for between three to eight months in your freezer and you can take it out to toast or eat fresh at any given time within that time frame.

It has to be noted though that you need to freeze your bread before it becomes stale. Freezing will not reverse the effects of stale bread but toasting it will go a long way to making the bread that much more edible.

Can You Put Frozen Bread in Toaster?

Now then, to address the question we set out to answer, let’s look at whether or not you are able to toast frozen bread. Is it safe to do so?

We’ve already established the health benefits associated with freezing then toasting bread but are there any implications on my toaster?

Well, you can toast frozen bread without any fear of causing any damage to your toaster. When toasting frozen bread, you will need to give a little more time than if you were toasting normal bread.

This means that you are going to give it an extra one to 2 minutes depending on the thickness of the bread slice. Some toasters now come with a function specifically for toasting frozen bread.

If you are still not convinced about the safety of doing such a thing, there are other alternatives that are available. Let’s look at one of them.

Can You Freeze Toast?

There are different schools of thought on whether or not you can freeze toast and I’m going to talk about both of them here. There are those who suggest lightly toasting the bread first then freezing it.

It is suggested that you not use a microwave oven to do this because it will remove the moisture from the bread.

The second school of thought suggests that when you toast bread, you are essentially drying it out such that there is no longer any water molecules left. Freezing acts on the water molecules in the bread and the toast, in this case, cannot be frozen.

The conclusion of the matter is that you definitely can toast frozen bread. In fact, freezing bread then toasting it offers a whole lot more nutritional benefits than not toasting at all or just toasting fresh bread.

frozen bread will not cause any known damage to your toaster and is a very safe practice. If you are still unconvinced as to whether or not to use your toaster, you can get similar results using a conventional oven or your microwave.