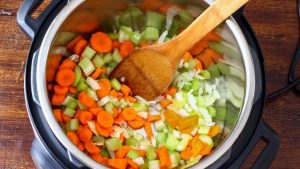 The answer to this question is not as clear and cut out as I may want it to be but I will attempt to answer it in the best way possible.

In short, it is not possible for an Instant Pot to explode but there have been reported instances of Instant Pot explosions and in this article, I am going to do my best to explain just why this happens.

How the Instant Pot Works

Pressure-cooking helps you prepare food that would have otherwise taken hours, in a matter of minutes. This is one of the biggest reasons why people use both old school (manual) stovetop pressure cookers as well as modern electric pressure cookers.

The pressure needs to be regulated to a specific, safe level to avoid explosions. In older, stovetop pressure cookers, this regulation is done through a weighted pressure regulator which was usually located on top of the lid.

In an Instant Pot, however, this is done through a pressure regulator which keeps the pressure between 10.12 – 11.6 psi.

If the pressure exceeds 15.25 psi, the steam release on the lid of the pot is pushed up and steam is released until the pressure drops to the optimal range.

Having this understanding will help you operate not only the Instant Pot safely, but other pressure cookers as most accidents happen because of ignorance of the mechanics behind pressure cookers.  I will explain more about this later.

Instant Pots are Designed with Over 10 Safety Features

Because most pressure cooker accidents are due to user error, the Instant Pot was designed with 10 safety features to help circumvent these errors. Here is a list of these safety features:

When the lid is not closed properly or missing, the Instant Pot will not activate pressure cooking. You can, however, use the sauté and keep warm functions in selected models.

If for any reason, the lid has leakage, the programming on the Instant Pot will be switched to keep warm and will not build up to pre-set pressure levels.

This leakage could be due to the steam release not properly closed off the sealing ring either missing or not fitted properly.

When food is cooking, there is the possibility of food particles clogging up the steam release vents thereby clogging it up. The Instant Pot has a vent shield which protects the steam vent from any food particles.

This is one of the key safety features on the Instant Pot. When the contents of the pot are still pressurized, the lid will lock and prevent anyone from opening it until the pressure comes down.

As already stated earlier in this article, the temperature, and therefore pressure, of the pot is regulated to make sure it remains at optimal levels depending on what you are cooking. This is achieved by a thermostat that regulates the temperature of the Instant Pot.

If the temperature in the Instant Pot rises too high due to things like no moisture in the pot or a host of other reasons, the heat will be cut off thereby preventing burning the food or another undesirable outcome due to excessively high temperatures.

Extreme Temperature and Power Protection Instant Pot comes equipped with a special fuse that protects against excesses in both heat and electric current.

Linked to the regulator, the Instant Pot also has automatic pressure control which releases steam and brings down the pressure when it exceeds 15.23 psi.

Finally, the Instant Pot also has an added layer of protection in the event of the pressure regulator malfunction.

If the pressure becomes too high, a protection mechanism will be activated which shifts the inner pot downwards which creates a gap between the lid and inner pot releasing steam into the inner chamber and stopping the heating.

Despite these features, there have been reported cases of the Instant Pot exploding and causing serious injuries as well as property damage.

One such report is that of Mary Cooper and her 11-year-old daughter Caroline who were making soup for a grieving neighbor.

When they had finished cooking and were venting it, Caroline opened the lid and the pot exploded burning both of them. Caroline sustained 3 rd degree burns on her face and body.

Though her face was healed completely, she sustained some permanent, painful and disfiguring burns injuries to her body.

The investigative TV show that brought this story to light ran tests on the 3 Instant Pot models to establish whether or not the pots could be opened when the contents were under pressure.

2 of the 3 units tested were sealed shut when contents were pressurized but the third one was easily opened after 3 different attempts.

Even though the pot did not explode, the boiling contents spilled over the side and could easily cause severe injuries.

There are other documented cases of Instant Pot explosions but the majority are fortunately not as bad as the account we’ve just given.

It is reported that there are over 10 million Instant Pots that have been sold and stacked against the units that do malfunction, the number of mishaps accounts for a small percentage of the total figures.

However, because the Instant Pot is an everyday household product, these numbers are still too high and if you do choose to go for the Instant Pot, you would at least want to ensure that you take all the necessary precautions to ensure maximum safety.

Let’s look at the reasons that an Instant Pot can explode and how you can avoid them.

How and Why an Instant Pot Can Explode

This can happen in a number of ways but the most common is food particles collecting in the valve. This can potentially stop the pressure from being released leading to malfunction.

Make sure to clean the release valve and other components regularly to avoid this happening. Another user-related mistake is when the steam valve is blocked by something like a dishtowel.

In one of the documented cases of explosions, the lady concerned threw a dish towel over the Instant Pot lid which resulted in an explosion. I can’t stress it enough, keep the steam release valves clear of any form of blockage.

Another major reason for accidents happening with the Instant Pot is people overfilling their pots above the max level.

Some foods expand as they cook and this will cause the steam release holes to be blocked. Always make sure that you load correct amounts of food into your Instant Pot.

Not changing the Sealing

Your sealing ring needs to be changed every 12-16 months and cleaned regularly. A faulty sealing ring is often the cause of some “minor explosions” that have been reported over the years.

Not Reading the Manual

It’s a simple thing to do but it is surprising just how many people don’t read product manuals. In order to operate the Instant Pot in the proper way, you need to read the manual. The user mistakes I have described above and others can easily be prevented if people read the manual.

the Instant Pot is a great product designed with the user’s convenience and safety in mind and, just like any other tool out there, you can easily hurt yourself and others when you do not use it right.

I hope this article has helped clarify some things for you as far as the Instant Pot is concerned. We would love to hear your comments and contributions below.

looking for an instant pot to use? check this guide out.

Agnes is a kitchen and cooking enthusiast as well as a fitness fanatic. She loves to help readers upgrade and furnish their kitchen with the best available products! She is the primary writer behind SmartKitchenImprovement.com and hopes to share little tidbits of knowledge she’s picked up over her years as a mom and wife.