Skip to content
Home » When to Open Instant Pot: The Safest Time to Do it 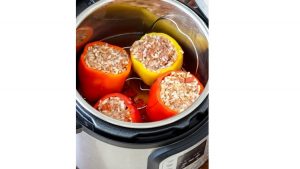 There have been many questions regarding just how safe an Instant Pot or any other pressure cooker for that matter, is.

These questions arise due to the fact that there have been reports of pressure cookers exploding causing serious burns and in less serious cases, minor burns.

At that point, you can safely open the Instant Pot. The Instant Pot comes with an in-built safety feature which does not allow you to open the lid while it’s still under pressure.

This is the case in general but independent tests have been done on 3 models and it was discovered that one of them actually did open while pressure cooking.

There have been a few documented cases of accidents with an Instant Pot that have led to serious injury due to no fault of the user but the majority of burns are due to user negligence especially when releasing steam to depressurize it.

I am going to look at how you can safely release pressure from an Instant Pot so you avoid any of these accidents to you and your loved ones.

There are 2 ways of releasing pressure from an Instant Pot, these are quick release and natural release. Quick-release, as the name states, let’s the steam come out fast from your Instant Pot while the natural release is a lot slower.

Whether you use quick or natural release depends on the recipe. If you are using a recipe from an online community or are using the Instant pot app on the advanced pots, they will tell you whether or not you need a natural or quick release.

How to Perform a Quick Release

The Instant pot has a pressure switch at the top which you can set to either venting or sealing. If you are pressure cooking, you will need to have it set at sealing.

This seals the Instant Pot and allows pressure to build up inside. When the pressure is built up in the pot, the float valve will rise up.

At this point, you then set the timer to the required cooking time like 10 minutes. Once the timer runs down to zero, you then need to move the switch from sealing to venting and steam will be released.

You need to be careful when performing this step as the steam can get really hot and burn you. You also want to do a quick release away from any cupboards and walls as these can get damaged over time. Not all recipes should use a quick release.

If you are cooking beans, for example, they can break up and some meats can actually toughen up. You need to need to use a slow-release in such instances.

How to Perform a Slow Release

To perform a slow-release, you need to cook your food as instructed in the recipe and once your timer counts down to zero, just let the pot sit and depressurize naturally.

This can take anywhere from a few minutes to as many as 30 minutes. You will know that the pot has fully depressurized when the float valve falls down by itself.

In all these cases, you will not be able to open the Instant Pot. As already mentioned, it a safety feature that is built into it to prevent any accidents from happening.

When you are doing a slow-release, different recipes need different times to depressurize. As already stated, some foods take a few minutes while others take more time.

When the cooking time has elapsed, the display panel will show L000. From this point, it will start counting up. When you are cooking beans, you need to allow them to sit for 30 minutes.

The float valve may actually drop all the way down even before the 30 minutes are up but you need to allow the full 30 minutes in order to get the best results.

So, to wrap up this article on when to open an Instant Pot, I can answer it this way. You can open an Instant Pot safely when the float valve goes down but some recipes require that you do not open the pot for a designated period in order to get the best results.

I hope this article has helped you to answer your questions about when to open Instant Pot. As always, I love to hear any questions, comments, and contributions you might