Skip to content
Home » What Pressure Does 134a Run in a Refrigerator? 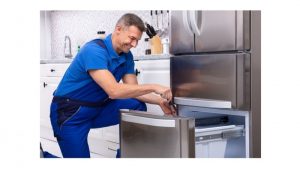 Understanding the running pressure of your refrigerator is an essential thing in handling and maintaining the refrigerant system.

When it comes to refrigerant systems, two pressure gauges can either be used, that is low or high pressure. As a low-pressure refrigerant system, the R134a is used in most home refrigerators as it is very effective and convenient for high-temperature applications.

The R134a is a popular refrigerant used in a variety of modern refrigeration and air conditioning applications. Most refrigerators built after 1995 typically uses the R134a refrigerant.

Also, it does not corrode metals like aluminum, copper, or stainless steel. The running pressure of the R134a refrigerant is normally affected by variables like temperature.

Just as with other refrigerants, the pressure of R134a is parallel to its temperature. In the R134a, pressure can be determined at any temperature that ranges between -22 to 202 degrees Fahrenheit.

This can be done by reading from the pressure-temperature chart on the refrigerator. Refrigerators using R134a refrigerants are designed to operate under moderate and higher temperatures.

That’s why they are suitable even in places like the kitchen where the ambient temperature is usually high.

The Pressure Changes with Temperature Variation

At the lowest temperature, the running pressure of the coil should be 22 pounds per square inch. Speaking of the temperatures, the lowest is considered to be 45 minus 20, which equals to 25 degrees Fahrenheit.

Similarly, the coil should run at a pressure of 57 pounds per square inch at the highest temperature, which is 40 degrees Fahrenheit. If the ambient temperature rises or lowers than normal, the pressure changes accordingly.

This variance between the coil and refrigeration box temperatures is what is called the temperature difference.

Low Side and High Side Pressure

The R134a exists as either gas or liquid throughout the refrigeration cycle. The most efficient way to fill the compressor is by using the liquid R134a on the high side and gas on the low side. The low side pressure is the most appropriate for recharging the fridge. Besides, it is useful in diagnosing an alternating current system based on normal pressure readings.

The pressure readings that are higher or lower than the normal running pressure can be an indication of an overcharged system.

However, when the fridge’s compressor starts running, the pressure may appear to be higher than normal. But, after running for a few minutes, the pressure should go back to normal. If you realize that it remains high, then there is a possibility that the refrigerant system of your fridge is overcharged.