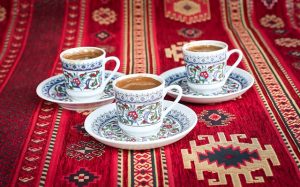 This time I will tell you about a cult: Turkish Coffee. It is more than a type or way of preparing coffee.

A simple drink, strong flavor, and texture, full of tradition, recipes, around which cultural, social, and even esoteric meanings revolve.

Some preparations transcend taste and smell to go beyond the experience, as does coffee.

But in this case, it is about going a little further: to delight. Well, you do not stay with just tasting it, but you enjoy the crafts, the ritual, and the stories behind its origin.

I recommend that you settle in well to enjoy this wonderful written trip, in which you will know the origin of Turkish coffee, I will explain how and what you need to prepare it and something else that you cannot miss.

Origin of Turkish coffee
Turkish coffee is also known as coffee Arabic because the Middle East traces its origin. It is said that, in the early 16th century, Yemen’s Governor Özdemir Pasha brought coffee-based drinks to Istanbul.

There the technique arose that is characterized by heating the coffee powder in a metallic container called a cezve. In which the water is added, the coffee very ground, almost like the flour, and the sugar; and then it is placed directly on the coals or sand stove.

In the beginning, the entire process was carried out at the moment, from the roasting of the coffee beans. The grind and infusion. Thus obtaining a coffee with a strong texture and flavors and very aromatic.

Then it gained popularity by establishing coffee shops, generating a social culture around coffee that has been maintained to this day. People came to taste coffee, read, play chess, and discuss topics of interest.

This custom spread from Turkey to all of Europe.

Today the Turkish coffee culture is considered by UNESCO as an Intangible Heritage of Humanity. Due to the meaning of hospitality, relaxation, refinement, and social relationships that arise through their service.

An invitation to have Turkish coffee can be the reason for a great social event or some special ritual. In which each element is important, from the implements to be used such as the cezve, the cups, the sugar, the freshly roasted and ground coffee, to the way of preparing and serving.

What is Turkish coffee?
Turkish coffee is a way of preparing and serving coffee that is recognized as the oldest in the world. It stands out for using its own or special implements such as the Turkish grinder, the cezve, the stirrer spoon, and some very particular cups. Similar to those used to taste espresso. But with very particular ornaments.

Originally it was prepared with a variety of Arabica coffee, however, you can use any variety of your liking. Of course, it is extremely finely ground, like powder.

Turkish coffee is very concentrated, strong in appearance and flavor, served with typical sweets and water. It is an unfiltered drink so it is strong on the palate and in effects. It is taken in small portions, in small sips.

How to prepare Turkish coffee?

It is very simple, as long as you have the implements and follows these steps:

Turkish coffee is tasted and read

The density and composition of Turkish coffee leave an imprint on the cup that has served esotericists to create cafeomancy or reading the coffee grounds.

I will comment on this, although it is far from the intentions of my blog. But it is part of the coffee environment… Although do not believe that divinatory arts.

According to connoisseurs of the esoteric arts, the coffee grounds or grounds that rest at the bottom of the cup can be interpreted as predictive messages. With which you can know your destiny and the reason for the events that occurred in the past.

More than a belief or not, it is a very particular, romantic, and even spiritual tradition and anecdote that Turkish coffee brings with it.

I want to think that it is a creative point of view, which helps you see things differently. And that, of course, makes me enjoy the magic of coffee much more. Giving it a hopeful and spiritual meaning.

It is very simple, to do, once you have enjoyed your cup of Turkish coffee, turn the cup on a plate.

Then turn it seven times counterclockwise.

Pick up the mug and look at the shapes and stains that remain at the bottom of the mug. What you see or perceive will depend on your intuition and level of interpretation.

However, everything to the left of the cup represents your past. To the center the present and the right the future.

What is marked near the handle refers to your home, the family.

Large shapes are the most important. You should look at the largest and focus on it. Definitions of the possible figures are infinite. There is the fun. First, try to see it at the bottom of the cup and then try to know what it means to you.