Skip to content
Home » Spoon in Microwave: Can You Really Put It 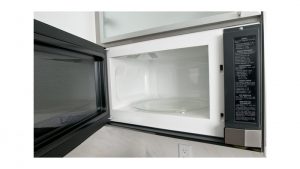 Metals such as forks, spoons and knives are great conductors of electricity; they contain a lot of electrons which move freely.

Contents show
How does the microwave work?
What Happens When You put a Metal Spoon in the Microwave
Conclusion on microwaving a spoon
Related Posts

How does the microwave work?

Substances that absorb the heat rather than reflect it for example some polymers and ceramics convert the microwave energy into heat thus helping in heating your food or water faster.

What Happens When You put a Metal Spoon in the Microwave

Metals have many electrons that get pulled by the microwaves. These electrons cause the thin metal sheet to heat up quickly which might result in the appliance getting burnt.

Metal with kinks are even worse because once they heat, the electrons tend to concentrate on certain areas which causes them to bounce onto the walls of the microwave.

The bouncing electrons keep the electricity from entering the metal which ends up being reflected. When the microwaves are reflected instead of being absorbed, they create a charge density such that the electrical potential in the spoon exceeds the dielectric breakdown of the air.

This results into your spoon arcing inside your microwave thus creating another electrical conductor with lower potential which happens to be the walls of the microwave.

When this happens, the electrical sparks can burn holes in the metal walls. The sparks are also capable of burning the magnetron in your microwave.

In the modern silent microwaves, these sparks generate a surge that damages the sensitive microelectronics which kills your microwave or make it unsafe to use.

Something else that might render your microwave useless is trying to heat food that’s been wrapped with an aluminum foil or a metallic container.

When the energy is not absorbed properly, it can’t go anywhere and its only escape is bouncing up inside the microwave thus damaging the magnetron.

Trying to heat your food with a spoon inside the container means the food will not heat as it should. This is because the spoon will absorb all the heat that’s meant to heat the food.

Conclusion on microwaving a spoon

The bottom line here is, never put any metal or metallic substance inside your microwave; it almost always results in accidents.

Other things that you should not put in a microwave are paper bags, hot peppers, travel mugs, aluminum foil, hard-boiled eggs, Styrofoam, Chinese take-outs and lidless containers