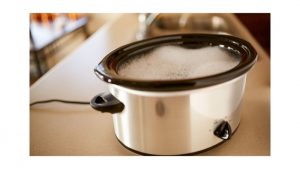 In this article, I will review the rice cooker vs the crockpot. The modern kitchen really has come along way from when we were growing up.

Bulky equipment has been replaced by smaller, countertop variations and in some cases, devices like the Instant Pot have merged a lot of appliances into one helping clear the clutter that was now in most kitchens.

The major difference between a rice cooker and a crockpot or slow cooker is that a crockpot works with low temperatures and takes a minimum of around 4 hours to get to a level of simmering.

A rice cooker, on the other hand, can get to boiling point quite easily and is capable of much higher temperatures. To get a better understanding f what each one of these appliances is, let’s look at them individually.

The Difference between Rice Cooker and Crockpot

A crockpot or slow cooker is a pot that is designed to cook food very slowly. They consist of a ceramic inner section (some models have a coated metallic one) that holds the food and an outer metal cover that houses the controls and heating element.

To get an appreciation of how slow he heat in a crockpot rises, it takes a minimum of 4 hours for a crockpot to get to the cooking temperature which is usually a very light boil or simmer.

Food prepared in this way has the advantage of being rich in flavor and generally tends to be more nutritious because the lower temperatures don’t destroy the nutrients in the food.

When the lid is closed, the steam that rises from the food condenses and drips back into the food meaning that water-soluble vitamins are not lost. This also helps to enhance the flavor in the food.

You can set up a crockpot to cook a meal during the day while at work and come back in the evening to a ready meal. In older models of the crockpot, you had to manually switch the crockpot on and off but in newer models, you can set a timer and the crockpot switches off when the time has elapsed.

A lot of the newer models also have a keep-warm function which ensures that the food is kept warm for you until you are ready to eat. Some even come with apps so you can control them from the office or while at the kid’s soccer game.

A rice cooker or steamer is a cooking utensil designed to cook rice right each and every time. Just like the crockpot, it has an inner section where you put the rice and an outer section which houses the controls and heating element.

Unlike the crockpot, the heating element can give off high temperatures and come to a boil pretty fast. The rice cooker has a set of temperature sensors that monitor when the heat reaches a certain level then regulates it.

In contrast to the traditional way of cooking rice, you do not need to monitor your rice once you have loaded it. Your job is to measure and prepare the rice then add the right quantity of water. The rice cooker will take care of everything else for you.

Though the basic architecture of the two appliances is generally the same, they function in pretty different ways. If you want rice cooked perfectly each and every time, then the rice cooker is for you. If you want flavor-filled and nutrient-rich food then the crock pot is the utensil or you.