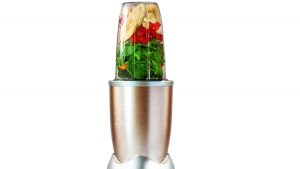 In this article I am going to do a comparison of the Nutribullet Prime vs Pro. These are Nutribullet’s high powered blenders which offer slightly different benefits when compared to each other.

The Nutribullet Pro and the Nutribullet Prime are two models from the family of personal blenders made by Homeland Housewares. There are a couple of differences and similarities that may want to know before you make a commitment to own any one of these two great products.

Blenders have quickly become a staple in most kitchens over the years. They are no longer something that is kept away for a long time then only taken out when there is a special meal to be made.

Now you can use a blender almost everyday for basically any meal of the day. This has seen the rising popularity of the personal blender. Nutribullet are such blenders. They do a better job serving individual needs as opposed to a big group.

What is the difference between the Nutribullet Prime and Pro

The Prime automatically stops and starts in 45 second cycles. It does this readjust and allows for maximum extraction.

This feature is also handy in keeping your blender from overheating. It also automatically chooses the most suitable blending speed depending on what ingredients are inside it.

Cool right? When it reaches the peak point of extraction, the Prime will stop automatically. However most users still prefer manually operating the blender themselves.

The smart feature is not everyones favourite. In that case the Pro is still a preferred choice by the majority. According to the New York Times the Nutribullet Pro is the best Nutribullet Model.

It has the best price to perfomance ratio. Compared to all the other models it has a great perfomance and a great retail price.

We can take a look at the RPM for instance. RPM refers to the number of rotations of the blade per minute. Both the Pro and the Prime have the same RPM of 25 000.

Even though the wattage is more by 100 the results are nearly the same. However the Pro still costs significantly less. With such a great benefit from the Pro it is evident why it is a favourite for most users.

A Good lifestyle is accompanied by great food choices. Sometimes you want to prepare your smoothies in advance and have them much later.

You would want to have a big enough container to store for later consumption. Nutribullet ensured this becomes convenient for you by making the colossal cup.

The Prime however has much bigger cups than the pro. Over and above that you will find included in your set a stainless steel thermal cup.

The thermal cup has a capacity of up to 28 ounces. This ensures your smoothie or juice can stay cold for up to 8 hours.This is a perk of getting the prime that you will not get with the Pro.

Travelling with your Nutribullet is one of the coolest perks of owning one. It is very portable. The two blenders are very light and have a very small difference in weight. The Prime weighs 2.8kg while the Pro weighs 2.6kg.

Adjustment In the Nutribullet Range of models you find them all operating on one speed. It is non adjustable. However this is a different case with the Prime. It has different speeds but no speed dial. It selects a suitable speed by itself using smart technology.

Similarities between Nutribullet Prime and Pro

Both models of the Nutribullet are dishwasher safe. The cups can go on the top rack in the dishwashing machine while the other components can be washed in warm water. There are some components that need hands for a proper wash.

The two models have power bases with similar size. The difference is in the weight. If you already own one of these and you want to try out the other you quite get the picture of how much space you will need in your kitchen.

Just like any other product that you will find anywhere across the world there are great things then there are a few drawbacks.

What is important is to identify what exactly you would like to achieve with the product then you will know what is suitable for you.

A lot of users have complained about the issue of burning wire. This usually happens when the blender is being overworked. It is always important to adhere to the instructions in the manual.

Always make sure you do not overload your blender with ingredients. Refer to the max line marked out on the pitcher and keep contents below it at all times.

Generally Nutribullet products are great products. However the Pro has been a favorite for most households ever since it was launched. Even after the Prime and the RX, most people still prefer the Pro. We hope this was useful information. Enjoy your kitchen!