Skip to content
Home » Instant Pot Vs Crackpot: Which is a Smarter Choice? 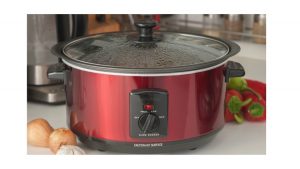 Many people value simplicity and ease to use kitchen appliances when it comes to cooking. It is the reason why many homes tend to have both an instant pot and crockpot for cooking delicious meals.

However, there is plenty of kitchenware in the market but many people prefer either a crockpot or instant pot or both.

Research shows that these appliances are among the most popular choices in the market. These two gadgets tend to have a lot in common but some core differences make them unique to each other. The devices are known for saving the kitchen counter space.

Some people adore crockpot due to slow cooking nature which gives the food opportunity to simmer while others instant pot due to the ability to cook food very fast.

If you are planning to prepare dinner before work then consider crockpot but you still have the option to consider both items.

Learning the differences, advantages, and disadvantages of each appliance will help to make an informed decision.

The product comparison guide provides in-depth information about instant pot and crockpot in terms of hidden features, pros, and cons. The information will help you consider either one of them or both. Let’s roll the ball.

Instant pot and crockpot have close similarities but few differences that make them stand apart. Here are some of the things that will help you choose the right appliance that meets all your needs. They include:

Many people are working around the clock to prepare delicious and healthy meals for their family members. This begins by picking the right cooking appliance.

People have lost patience with the traditional cooking style which tends to be quite slow but some have remained conservative about their cooking ware.

Speed is a key factor to consider when shopping for cooking devices. If you love cooking faster then consider gadgets that suit the cooking style and vice versa.

The cooking appliance work by using steam to buildup pressure. The gadget heats the water faster to produce steam and generate pressure for cooking. The faster pressure buildup facilitates faster cooking of food.

The appliance is a slow cooker which implies that food takes a long time to be ready. It generates low temperature which gives the food opportunity to simmer. If you are planning to prepare dinner before work then it is the right kitchenware to consider.

The Amount of Kitchen Space

The space inside the cabinet and counter determines the type of cooking appliance to consider. Many cooking gadgets tend to vary in size and shape. Therefore, it is good to examine the available space before making any purchase.

The device is also known as a multi-cooker. It tends to have a skew tall and narrow feature. These features give the appliance an opportunity to occupy a small room on the counter and also fit easily in the kitchen cabinets.

The slow cooker have a large footprint marked with an elongated oval shape. This implies that they cannot fit in many kitchen cabinets and at the same time occupy large space on the counter.

Buying numerous cooking appliances make the kitchen to be congested. This will result in the frequent occurrence of accidents.

It is advisable to purchase cooking instruments that can perform two or more roles rather than one. The idea results in the invention of both crockpot and instant pot which almost perform the same function but in a different way. Let’s find out:

The cooking gadget is multipurpose. It can be used for pressure and slow cooking depending on your cooking recipes. Therefore, the device can be used to prepare many foods at the same time and make them delicious.

The cooking instrument is known for performing two things such as slow cooking at low temperature and food simmering. However, it cooks one food at a time and takes a lot of time for the food to be ready.

Cooking is more than talent and many people tend to mention it as a call. The desire to cook a variety of recipes tend to toss the mind of many people.

However, many of these food recipes were formulate sometimes back before the invention of many cooking appliances. It is good to pick a gadget that suits your recipes.

The cooking equipment is a new invention in the market right now and this implies that there are few cooking recipes designed around it. However, instant pot has the reputation of cooking a wide variety of foods.

This is the earliest invention in the cooking industry and many cooking book recipes are designed around it. Therefore, the instrument has the capability to cook several types of food recipes.

The ease of cleaning kitchen utensil and appliances help to enhance healthy living due to consumption of clean food. Cleaning help to get rid of stuck food which creates a ground for bacterial growth and this might cause diseases. Get an appliance that is easy to clean up.

The pot has a stainless steel interior surface which is known to be the easiest when it comes to cleaning. Getting rid of caked food debris is much easier since it is non-sticky and dishwater safe.

The crockpot is made from heavy stoneware which creates a ground for food to get stuck. Removing the caked food debris tend to be quite tedious and time-consuming. Lack of cleaning can result in stomach upset and other weird conditions due to dirt.

The cooking gadget has a lot of functional settings and it comes with comprehensive manual instructions for guidance. It is a clear sign that it is difficult to use since you need to master the manual guidelines.

The appliance has simple operating buttons that do not need any written manual. It is the reason why it can be used straight away from the box after making the purchase.

Getting cooking appliance that is multipurpose will save the cost of buying several cooking instruments and also the space in the kitchen. This is the key to why making companies are reducing the production of single-purpose cooking devices.

The instant pot is a multipurpose cooking appliance. It has a reputation for cooking quite a large number of food recipes due to the presence of many operating settings.

It saves on the cost of buying one cooking device for certain food recipes.

I normally urge people never to judge the performance of cooking equipment based on their prices. There are some most expensive cooking appliances in the market but they have poor performance. It is recommended to get an appliance that is worth the value of money.

The pricing of the cooking appliance depends on the size and the brand. Besides that, the gadget has several cooking settings which implies advancement in technology.

Generally, instant pot tends to be quite expensive due to the multipurpose feature of cooking several food recipes. It is also manufactured using advanced technology.

The cooking gadget happens to be the earliest invention and it has been in the market for a long time. Therefore, their prices tend to be much affordable and manageable.

Many people love both cooking appliances. If you are looking for a multi-cooker with a range of options then consider instant pot.

The appliance can help you cook several food recipes with ease. On the other hand, if you are looking for a device with a slow cooking function and can cook economical meals then consider crockpot.

It has simple functions that make the operation quite easy. All in all, instant pot is regarded to be the number one cooking appliance since it was made using modern technology, unlike crockpot. Although the prices tend to be high, it is worth the value of your money.