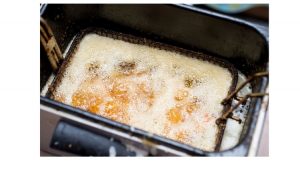 So, what happens when you put ice in a deep dryer? You may be asking this question for a science project or merely to satisfy your own cooking curiosity.

Whatever the case might be, this article will attempt to answer you in the best way possible. Here is the short version.

When you put ice in a deep fryer, the ice reacts with the oil because of the huge difference in temperature states, the ice has to move from a frozen state to a liquid state in as short a time as possible.

This causes a violent reaction and, depending on the amount of ice you put in, even a fire. Dry ice will also react differently to regular ice cubes.

Let’s take a look at that more in-depth and try to explain exactly what happens in different scenarios. As you most probably learned in school, matter exists in 3 states namely liquid, solid and gas.

Keep the water boiling and these molecules turn into steam (gas state). In this state, the molecules are no longer confined to the container they were in but literally fly away. I’m sure you are bored with the science lesson but bare with me for just a little longer.

What Happens When you Put Ice in a Deep Fryer?

Now that you understand a little bit about the science behind it, ice and hot oil in a deep fryer are in two different states. In this scenario, one state has to overcome the other.

Because the molecules in the oil are already in a hyperactive state, they will naturally overrule the ice molecules which are in a more dormant state.

The transitions between states happen in nature all the time but in most cases, they do so in a gradual manner. When the changes are rapid and sudden, we see instances where the matter is in solid-state cracks especially when there are sudden cold or hot spells.

This is because of the sudden activation of the molecules. There is a huge temperature gap between the frozen state in ice and the hot liquid state of the oil in the deep fryer.

When you introduce ice into the oil, there is a violent reaction as the temperature in the ice rapidly rises and the molecules move from a really low vibration to a really high one in a very short space of time.

If you put in a single ice cube, you will get a slight boiling reaction from the oil. If, on the other hand, you add a large amount of ice, the reaction will lead to a very violent reaction and a burst of flame.

You wouldn’t want to be anywhere near the deep fryer when this happens. If this happens in the kitchen, there can be a very real risk of a fire so you need to be very careful that this does not happen.

What Does Dry Ice in a Deep Fryer Do?

It was discovered that the reaction that dry ice has with ice when compared to regular ice was quite different. When dry ice was placed in the deep fat fryer, the reaction was not as violent as with regular ice.

In fact, it reacted in more or less the same way that placing a piece of chicken would.

The answer to the question of why does ice make deep fryers explode is that there is a difference in temperature between the ice and the oil. When you put ice into a deep fryer, it cools the oil down.

This causes a drop in pressure inside your deep fryer. When there’s a difference in pressure between two areas, air will move from one area to another to equalize them.

In this case, air moves from your deep fryer into the ice, causing it to explode. The reason why this happens is that when something freezes quickly or under pressure (such as when you add ice cubes to an already cold liquid), tiny bubbles of gas form inside it.

These bubbles are called “nucleation sites.” When these nucleation sites burst, they can cause explosions inside your deep fryer. So how can you avoid having your deep fryer explode when adding ice? The best way would be to add room temperature water or other liquids instead of putting them directly into the fryer itself

What happens if you put ice in hot oil?

The answer is not what you might expect. Instead of sizzling and boiling, the oil will immediately start to bubble, spit, and throw hot oil up and around. This is because the sudden addition of cold water causes an explosive change in the pressure inside the pot.

When you add ice to hot oil, it lowers its temperature as much as possible in a short amount of time. So instead of boiling at 250°F (121°C), it will boil at 275°F (135°C), which means that there is less energy available for evaporation. This reduces the pressure inside the pot and causes bubbles of steam to form quickly.

The high pressure created by this steam pushes outwards on the lid and forces hot oil up into your face or onto your hand when you open it too quickly!

What Happens if You Put Ice Cubes in a Deep Fryer?

If you put ice cubes into a deep fryer, they’ll quickly change from frozen to liquid to gas. The change in state causes a powerful reaction that can damage the appliance and cause injury, according to the American Chemical Society (ACS).

Can I Deep Fry Frozen Meat?

Based on the explanations that I have given in this article, it is not advisable to deep fry frozen food. You risk serious injury to yourself and the great possibility of a fire.

There is also a high likelihood of your meat not cooking all the way to the center thereby risking food poisoning. Make sure to allow your meat to thaw out before you deep fry it.

Conclusion on Ice in a Deep Fryer

So, what happens when you put ice in a deep fryer? The answer is that you will get a violent reaction and the level of violence depends on the amount of ice you place in the boiling oil.

Dry ice, on the other hand, tends to react in a less extreme manner. It is also advisable to not deep fry frozen meat because of the possibility of a serious accident or food poisoning due to the meat not cooking all the way through.