Skip to content
Home » How Much Caffeine Does a Cup Of Coffee Have? (Explained!) 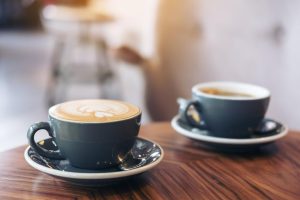 Every day, when you have a cup of coffee, you trust the effect that caffeine will have on you. It wakes you up, activates your energy and you receive that unmistakable feeling of well-being. But do you really know how much caffeine you need for it?

Caffeine is a chemical agent present in coffee plants that stimulate the central nervous system, heart, and muscles when consumed.

It was discovered and named as such by Friedrich Ferdinand Runge in 1819. Well, this chemical compound is also known as guaranine, theine, or mateine, since it is associated with the plant from which it comes.

It has a bitter taste and, in addition to coffee, it is naturally found in more than sixty plants such as tea, kola nuts, cocoa pods, guarana, and yerba mate.

Caffeine is the stimulant of choice for human consumption to activate temporary alertness. It provides several benefits, among the best known: it reduces drowsiness and provides energy surges.

Although in excess it can cause tachycardia, insomnia, and mental overstimulation.

How much caffeine can you consume?

According to studies conducted by the Food and Drug Administration (FDA), for healthy adults, it is advisable to consume up to 400 milligrams a day of caffeine.

Although this can vary from one person to another, as well as in the way of consumption or preparation of coffee.

How many milligrams of caffeine is in a cup of coffee?

The amount of caffeine in a cup of coffee depends on the type of coffee and how it is prepared.

Although when you check Google, it shows you an estimate of 212mg for espresso or 40mg for regular coffee, this is actually a more detailed calculation.

According to various studies * devoted to caffeine, generally an 8-ounce or 235 ml cup of:

In more concentrated preparations, served in a 2 oz or 60 ml cup we have:

How much caffeine is there in the cafes of the big chains?

If you are a regular at the large coffee chains, there is also data on how much caffeine is in each of the presentations of their drinks.

The preparations of Starbucks, the best-known coffee chain in the world, have the following caffeine ratio:

Finally, measuring how much caffeine is in a cup of coffee will depend on factors such as:

With this information, you can already calculate how many cups of coffee you can include in your diet for healthy caffeine consumption.

Without missing or overdoing it, enjoying coffee will always be a renewing experience.

Well, always, it’s better to indulge yourself with coffee, don’t you think?