Skip to content
Home » How Long Does Instant Pot Take to Preheat? 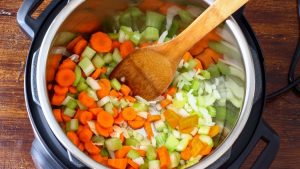 You’ve gotten your Instant Pot and now it’s time to start using all the amazing features you’ve heard so much about. I’ll be the first to admit that the Instant Pot has a cult-like following of users.

All you need is to just follow the online forums to see how true this is. For all its benefits, the Instant Pot is not perfect.

Just like anything else in life, it can come with a unique set of challenges and in this article, we will look at the preheating phase and answer the question “how long does Instant Pot take to preheat?”

On average, Instant Pot takes 10-15 minutes to preheat and this is mainly dependant on the number of contents that you have in your Instant Pot.

This period of time is known as the preheating phase and as already stated, it can take on average, 10-15 minutes. In some instances, it has been known to even exceed this time range.

For example, let’s say that your recipe says that you need to pressure cook your food for 10 minutes. You will need to add the pre-heating time to the cooking time.

Using our average time range, it means that your meal will actually take you between 20 – 25 minutes to cook properly. That’s the actual cooking time, you might think, but, there’s more.

There are basically 2 ways in which you can release pressure from the Instant Pot once the cooking time has elapsed. You can do a quick release or slow release which is also known as natural release.

A quick-release is when you turn the control know above the pot from seal to vent. Doing this allows the pressure to rapidly escape and will take a few minutes to completely depressurize.

A slow-release, on the other hand, means that you allow the pot to sit and let the pressure release naturally. A slow-release is necessary in cases where you are cooking delicate foods like beans which need time to slowly release pressure.

So, you need to also factor that time into your overall cooking duration.

A common problem with many newbie Instant Pot users is when their Instant Pot gets stuck on the Preheat phase. This problem can arise due to a number of factors which we are going to get into.

When the Instant Pot is in the preheat phase, it will show “ON” in the display panel. Once it reaches the required temperature, it then pressurizes and begins the pressure-cooking phase which then triggers the timer. There are a few things that can cause the pot to be stuck on preheating.

Release Valve Not Set to Seal

One common mistake among newbie Instant Pot users is that they forget to set the release valve to seal. If it is set on vent, the pressure is being released and it won’t pressurize.

You need to make sure that it is set properly. As the Instant Pot is coming up to pressure, you will see some steam come out, just make sure that it’s coming out from the float valve and not the release valve.

The float valve will seal once sufficient pressure has been built up and the steam should stop coming out.

Another reason that the Instant Pot may not come up to pressure and be leaking pressure in because the sealing rings are misaligned or damaged.

These need to checked regularly and replaced every 12 – 16 months. Another tip as far as sealing rings is concerned is to have at least 2 rings and to use different ones for sweet and sour dishes.

To wrap it all up, it should take anywhere between 10 – 15 minutes for your Instant Pot to preheat. If it takes longer than that, check against what I shared in this article to establish whether or not everything is as it should be.

That’s it for this article. I would love to hear your thoughts and experiences when it comes to how long it should take for the Instant Pot to preheat.