Skip to content
Home » Fridge vs Refrigerator: Is There a Difference? 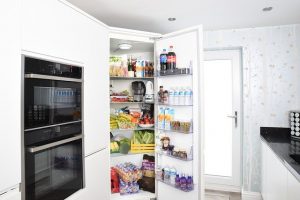 Most of the people have a basic idea of what a fridge and refrigerator do, but what most can’t seem to answer is the difference between these two appliances.

The core similarity of both of these equipment is maintaining a standard temperature, which helps in preserving items.

Their differences are, however, are rather uncanny and in the article below, we will explore the differences between these two. Before I put these pieces of equipment against each other, let’s see where it all started.

Contents show
The Frigidaire Brand
Difference Between a Fridge and a Refrigerator
The Purposes of Fridges and Refrigerators
The Temperature and Functionality Differences
What Should You Use?
Final Thoughts, Which one is Better?
Related Posts

Frigidaire, a celebrated leader in “white goods” or rather major household appliances, and is the inspiration behind the words refrigerator and the fridge.

Frigidaire, initially known as Guardian Frigerator Company, was founded in 1916 in Fort Wayne, Indiana. The brand name was, however, changed to Fridgidaire, in 1919 when General Motor founder, William C. Durrant invested in the company.

Fast forward, the company became a huge success and it’s here that people derived the word fridge to use it for their initial Frigidaire models.

Later on, further advancement in technology led to the makeovers and overhaul of the traditional fridge and thus came in the refrigerators.

At the very least, therefore, it would be right to assume that both of these appliances are of the same family and perform far or less similar tasks.

Difference Between a Fridge and a Refrigerator

From a casual perspective, a fridge is a shortened version of the same word refrigerator, a cooling device used in households all over the world.

Even though the term fridge is often referred to as slang and casual word, its popularity is increasingly rising in that more people are taking up this word.

If anything, a refrigerator is a rather long word that usually takes a moment to speak up. And in writing, it’s quite inconvenient to write so many alphabets.

Nonetheless, professionals in the industry never refer to refrigerators as fridges, as this gives a casual appearance of the gadget. But beyond the spelling, are there any other stark differences between these two?

Yes, the different functionalities define the identities of these two. Refrigerators, as we had mentioned earlier, are an upgraded version of the fridge, and they usually come with a built-in freezer and are typically more powerful than the ordinary fridge.

The fridge, on the other hand, comes in a variety of sizes, variations but it usually skips out the freezer part. Though the two words are often used interchangeably with one another, a refrigerator combines both the cooling and freezing mechanism, while a fridge omits the freezing mechanism to promote a compact build.

A refrigerator is commonly installed in residential homes or commercial spots such as restaurants. Refrigerators are often manifested with a big, glass window and have a rather large stature. Fridges, on the other hand, are a tad small in stature a great example of this would be a mini fridge and are often seen as an addition in small bars and hotel rooms.

The Purposes of Fridges and Refrigerators

To this end, it’s evident that size is one of the significant differences between these two models. And as it follows, the two products are used for different purposes.

Though both of them preserve items in lower temperatures, refrigerators bear more cooling and freezing power than fridges.

Also, the refrigerator offers a freezer compartment, which translates to more space, meaning you can store more items compared to a fridge.

The Temperature and Functionality Differences

The operational temperatures between this equipment differ, as well. Ordinarily, refrigerators are programmed to maintain the temperature a few degrees above the freezing point of water, for optimal temperatures for preservation.

The freezer compartment on the refrigerator helps to maintain the temperature below freezing point, meaning food items can be stored and will stay frozen until they’re taken out Fridges, on the other hand, particularly the small ones, are programmed to maintain a lower temperature so that the components inside maintain a cool temperature.

What Should You Use?

Though a refrigerator is more useful in storing your household goods and can be used in your domestic life, it doesn’t mean a fridge is of no use.

The fridge is particularly handy for storing items such as fizzy drinks, bread, pasta, water, and packaged goods. Similarly, wine and beers can also be stored on the fridges.

Nevertheless, a refrigerator is an ideal option for storing edibles, especially rich-hearty materials such as veggies, meat, fish, dairy products, and poultry.

Final Thoughts, Which one is Better?

Both of these models have their unique specialties. While the refrigerators seem like a more high-end type that will accommodate more components, a fridge, on the other hand, is a compact unit that equally stands out for its effectiveness.