Skip to content
Home » Fork in Toaster: Is it Safe to Put It? 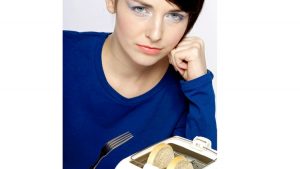 Your toast is stuck in the toaster and you want to get it out but can you put a fork in a toaster? We’ve all experienced it once or twice (or more times) in our lives where the toaster doesn’t want to give up the toast. How do you deal with it.

Can I put a fork in a Toaster? The coils in a toaster carry electrical current and when you jam a fork into a toaster, it can touch these coils causing electric current to pass through your fork, through you and into the ground. You don’t want to experience this.

We’ve all seen the memes before, the poor guy or gal who tries to take his or her toast out of the toaster only to get a shocking surprise (pun intended). You don’t want to be that guy or gal.

Can I Put a Fork in a Toaster While It’s On?

Let’s delve into this topic a little deeper now shall we? To figure this out, let’ look at how exactly a toaster works. A toaster has electric coils on the inside of it.

Electricity passes through these coils and they heat up turning red hot. The subsequent heat is what makes your toast.

Unlike in a stove or oven, the coils I a toaster are not insulated meaning that they have live electricity passing through them.

This is not an issue to you because the body of your toaster keeps the coils well enclosed and they pose no danger.

It is not a good idea to put a metal object into your toaster to release stuck toast because the metal acts as a conductor which passes up electrical current straight into your body. When your toaster is grounded or has a circuit breaker, the worst that can happen is you getting badly zapped.

Can I Put a Fork in a Toaster While It’s Off?

Putting a fork into a toaster while it’s off is the safest route to take.

You would assume that this elementary information that everyone should know but people can carry out half thought out actions and you and I have both fallen victim to this.

When you want to put a foreign object into the toaster, make sure that you witch it off at the mains first. Pulling out the plug is usually the best course of action.

Once you have done this, it’s now safe to gently poke around the edges of your toast to release it. A point to note is that the heat from the toaster can cause our fork to heat up.

Though the heat may not be sufficient to make the fork handle too hot, there is still the possibility that the lower part that you are jamming into the toaster can get very hot. Just make sure not to touch this end accidentally when you set it down.

Can You Put Plastic Fork in Toaster?

To answer this question, let’s consider the reason you want to use a fork in a toaster in the first place. It is usually because you want to remove food that is jammed in the toaster.

Let’s talk about how that plays out, shall we? You want to toast a bagel, you pop in a piece and the toasting process ends but the bagel doesn’t pop out.

You think to yourself, let me use a fork to pry it out. The only fork that’s close to you is a plastic one. The problem here is that the toaster is still too hot.

Using your fork at this point in time will melt the plastic. You have the option of waiting a few minutes for it to cool down before trying.

If you don’t mind cold toast then, by all means, go for it. If’ on the other hand, you would rather eat warm toast then this is definitely not an option. You a better off using a metal fork or butter knife.

Can Putting a Fork in My Toaster Damage it?

Will pushing a fork down your toaster cause any damage to it? Well, that all depends on how you do it. The electrical coils that get hot in toaster are coated with a material called mica.

Mica is an insulator that prevents electrical current from touching the body of your toaster. It is highly resistant to heat but very brittle.

When you put a sharp object into your toaster, it can cause the mica to crack exposing the charged wires underneath. If, by any chance, the inner wires touch the body, you are at risk of electrical shock.

You may not see immediate effects immediately, but over time, you will experience the effects that this damage causes.

How to Properly Remove Jammed Toast from Your Toaster

So, how do you remove stuck toast from a toaster? The first thing you need to do is remove the plug from the mains. Don’t just flip the switch on the toaster.

Some houses have wiring that allows current to still pass through to your toaster even when it’s in an off position. Once your toaster is unplugged, take a blunt object like a wooden spoon or a butter knife.

Open the crumb tray then push the toast out through the bottom. Your toast should come out easily. If your model of toaster model does not allow for this method, you can use a butter knife instead of a fork to gently work on the edges to loosen the toast until you can pry it out.

Make sure that you take the utmost care in order not to damage the toaster and pose some risk to yourself and your family.

Conclusion fork in a toaster

It’s advisable not to put a fork in a toaster at all but sometimes the situation calls for it. In such instances, make sure to take precautions such as unplugging the appliance from the wall socket before attempting to take the toast out. Make sure not to damage the internal components of the toaster as these can lead to greater hazard down the line.