Skip to content
Home » Do You Put Water in a Crock Pot? (Do Slow Cookers Really Need it) 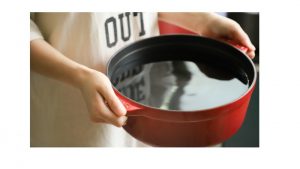 Do you put water in a crockpot? It’s a question often asked by new and intermediate crockpot users. You would imagine that for one to cook, you definitely need to have water or some form of liquid to do that.

When it comes to a crockpot though, it isn’t always that straight forward. The quick answer to whether or not to put water in a crockpot is really depended on the recipe.

Does the recipe require you to put water in it? If yes, then by all means, go ahead. If it doesn’t, then don’t. In order to really make sense of it all, there needs to be an understanding of just how a crockpot works.

A crockpot or slow cooker is called that for a reason. It cooks food for around 4 to 10 hours on relatively low heat. The temperature in a crockpot will barely reach the boiling point.

What this means is that there will not be any steam released and, therefore, won’t lose water during the cooking process.

Bearing this in mind, you really don’t need a lot of water in most instances and in some cases, none at all. I will explain a bit more about this the further we go with this article.

Generally speaking, when you slow cook food, it releases liquids in the form of water or fats that help with the cooking process.

Specific ingredients in certain recipes may already have enough liquid therefore you will not need to add any extra liquid. That being said, you will discover that different people tend to have and follow different rules as far as slow cooking is concerned.

Some suggest filling the crock pot halfway with liquid whether it’s water, wine broth or some other liquid. Other people and recipes state that you only need half or a quarter cup of water to cook certain recipes but a general rule of thumb would be to use considerably less water in slow cookers than you would use for the same recipe if you were going to cook it on a stovetop.

Putting in too much water when you slow cook meat, for example, may end up actually toughening it up and this runs counter to what you want.

A good guideline to apply here is to use around half the amount of water that you would use for a stovetop recipe.

I am now going to share a few rules that apply to slow cooking that relates to liquid levels. When you slow cook, we have already stated that it is very little to no loss of water through evaporation.

You want to make sure that you bear this in mind especially if you want a nice stew at the end of the day.

Use Thickener if too Runny

If you put in too much water, you will end up with watery stew. Sometimes you can’t help but come up with a watery result.

All is not lost if that’s the case. Simply add a thickener in the crockpot or transfer to a stovetop and add the thickener there and you have a nice, thick stew.

Some people believe that slow cooking frozen meat will allow the added advantage of the moisture from the ice as it melts.

You actually don’t want to do this. It only makes the cooking time much, much longer. You would rather thaw out the meat first then cook it in the crockpot.

When you use a slow cooker to cook a dish with multiple ingredients in it, you need to understand that a slow cooker cooks the food at the bottom faster than that at the top.

Stack the food into the slow cooker with the ingredients that take longer to cook at the bottom. As an example, if you are making a stew, line the meat at the bottom then the vegetables at the top. If you do it this way you will get great results.

When cooking chicken or fish dishes, for example, make sure that you don’ want the meat to be bathing in the liquid otherwise it will end up soggy.

A good way to go around this is to use a grill rack then place rack above the water level. If you don’t have one at your disposal or the rack does not go above the liquid levels, you can use aluminum foil raisers.

To make them, simply crumple up some aluminum foil into balls and use these to line up the bottom of the crockpot.

These balls should be above the water level in the pot. You then place your meat on top of these raisers. This will give you great results as your meat will not be soggy.

It also allows for even cooking as the heat can circulate freely within the slow cooker.

Don’t Under Fill or Over Fill Your Crockpot

The last rule I will talk about is to make sure that you don’t overfill or underfill your crockpot with water and ingredients. Most crock pots come with maximum level marker within the pot or will tell you in the manual the ideal loading level

s. A usual safe range is anywhere between half and 2 thirds full. When you underfill, you actually end up overcooking your food and if you overfill, you may end up with an overflow especially with foods that expand as they cook.

Other Precautions to Note When adding Water in Crockpots

Do Not Use to Reheat Food

Never use the crock pot to reheat food as this may lead to food poisoning. The temperatures in a crock pot do not reach the levels necessary to properly heat food in such a way that it prevents bacteria build up.

Rather use a stove top or microwave oven to reheat food and you should be fine. Once reheated, however, you can then use the slow cooker to keep the food warm.

When you open a slow cooker during the cooking process, the temperature drops significantly and it will take a long time for the temperature levels to rise back up meaning that you will need to increase cooking time by some hours in some cases.  Avoid doing this.

Do Not Set the Heat Too High

Conclusion on using water in a Crock-Pot

Whether or not you put water in a crockpot really depends on the recipe you are following. A good number of crockpot recipes do require that you use water or some form of liquid but the quantities you use are relative to what you are cooking.

There are general rules when it comes to the amount of water or liquid you use as well as getting the best from your crockpot and saving some electricity.