Skip to content
Home » Do Electric Stoves Need to Be Vented? (Explained) 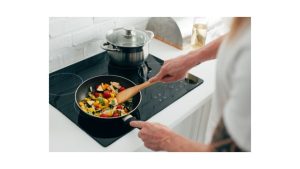 Electrical stoves have pros and cons. Although they are convenient, safe, clean, and easy to maintain, other than that a stove is an appliance that can be used to facilitate cooking. Electric stoves use electricity of course, and you might be wondering if your stove needs to be vented. In this article, I am going to answer exactly that question.

Contents show
Do Electric Stoves Need To Be Vented?
Do You Need a Range Hood with an Electric Stove?
Can You Have a Stove without a Vent?
Do electric ovens need ventilation?
Why Electric Stoves and Ovens don’t need to be vented
Related Posts

Do Electric Stoves Need To Be Vented?

In short, No, electric stoves do not need to be vented. Electric stoves use electricity to heat up and cook food. As such, they do not emit any toxic gas or fumes.

For the most part, electric stoves do not require venting. Because they operate with electricity, no fumes are produced. Gas stoves and other appliances that burn fuel or gas do require venting because the process of burning fuel produces fumes. Fumes from gas stoves can be dangerous if inhaled for long periods of time.

Ventilation is an important safety factor when cooking. Gas stoves, due to their burning of fuel, produce fumes with each use. Electric stoves, on the other hand, do not produce fumes from fuel combustion and therefore do not require ventilation. However, if you have an electric range with a gas oven or cooktop, you’ll need to ventilate that portion of the stove.

The electrical resistance of an element on an electric stove causes it to produce heat for cooking. The heating element is usually a coiled wire that glows red when hot. However, the gas burner on your electric range produces heat via a flame just like any other gas stove. And because burning gas produces fumes, venting is required for this part of the range

Do You Need a Range Hood with an Electric Stove?

Most people don’t need range hoods because they can be noisy and also require electricity. If your range is electric, you can get away with using only a fan in the kitchen, but if it’s gas-powered or has a wall oven, then a range hood is recommended for protection against grease and smoke.

Although it’s not really necessary for an electric stove, I would recommend you get a small one because electric stoves still create small amounts of heat and grease.

Can You Have a Stove without a Vent?

According to most residential building codes, homes with electric stoves do not require range hoods above the stove or cooktop. This is because electric stoves emit fewer airborne pollutants and combustible materials than gas stoves.

However, even if your stove doesn’t need a range hood to meet the code for cooking safely at home, it’s still best practice to install one when possible. This will help reduce indoor air pollution by removing smoke, grease, and other contaminants from the air in your kitchen while cooking and cleaning up afterward.

Range hoods are not required in many residential building codes, as long the stove is electric. If you do decide to install a range hood, it’s best to use a small one.

Electric ovens do not produce combustion byproducts and so generally do not need to be vented. However, there are a few reasons why it might be beneficial to provide ventilation for an electric oven.

Why Electric Stoves and Ovens don’t need to be vented

Electric ovens operate by heating an element, which then heats the air inside the oven. Unlike a gas oven, which burns fuel (natural gas or propane) to heat the air in the oven, an electric oven does not produce combustion byproducts, such as carbon monoxide (CO). Since there is no CO produced during operation, there is no need for ventilation to exhaust any of these gases from the kitchen.