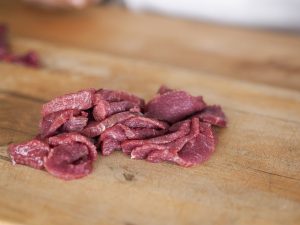 The Vitamix is such a versatile machine that it has replaced and, in some cases, displaced specialist kitchen appliances. It comes as no surprise then that one of the most asked questions on internet forums and blogs is “can you grind meat in a Vitamix?”.

It seems a weird question for a device that was generally viewed as a blender when it hit the market many decades ago. That’s how far the Vitamix has come.

You don’t need to clog up your kitchen counter space and storage cabinets with a bunch of other appliances, just simply get the Vitamix.

The Vitamix can grind meat among its many other capabilities. Stacked against some of the other brands on the market, the Vitamix consistently produces an amazing end product.

The Vitamix can grind both raw and cooked meat equally as well. Whether you want a consistency that is suitable for soups and stews or process cooked meat for ham and chicken salads, the Vitamix will definitely get the job done.

Now that we’ve established that it’s possible to grind meat in a Vitamix, what we now need to look at is how to do it depending on the consistency of meat you are looking for.

I will also be doing a comparison of the difference between meat ground with a meat grinder as opposed to the Vitamix. To do this somewhat effectively, we will do a comparison between mincemeat, sausages and hamburger patties.

If you are grinding raw meat, there are a few things that you will need to do first. The number one way of making sure that you get a good end result is to use cold meat.

Make sure that you keep your meat chilled before grinding. The next thing you need to do is cut up the meat into one-inch cubes.

Do not just throw in your meat in chunks larger than an inch. You will simply not get good results if you do that.

If you are using a Vitamix grinder, you start off at speed one and gradually work your way up to speed 6 adding a few portions of meat every 10 to 15 seconds if you want to make sausages. For more course results, use the pulse function.

Depending on what you want to use the mincemeat for, you will generally want it to have a somewhat coarse texture with the meat and fat nicely separated.

When the texture is like that, you get a juicy result. What can tend to happen with meat ground in a blender is that the fat gives you a streaky texture where the fat blends in with the meat.

When this happens, the meat won’t cook as well. It generally tends to come out hardened. One way to get around this is to grind the meat when it is semi-frozen so as to get that nice separation between the meat and fat.

When you want to use the mince in pasta dishes or pies, you want it to be nice and juicy especially if you sauté it first.

To make sure that you get the right texture, you need to start off at a low speed and gradually raise it until you get the coarseness that you desire.

Hamburger patties require more or less the same considerations as those for mincemeat. You want the meat and fat nice and separate so that when you fry them, they come out nice and juicy.

You can really tell the difference between burger patties ground on a traditional meat grinder and those done on a blender or food processor.

With the Vitamix, you can use a combination of the pulse function and start from a low speed then working your way up.

If you are grinding sausages, then the Vitamix will get the job done. Sausages look and taste better with a smoother consistency so the method we described earlier in the article where you use the variable speeds from 1 and working your way to 6 works best.

You will be adding your meat every 10 to 15 seconds. Grind the meat in the Vitamix then mix in all the spices in a bowl.

If you were sitting on the fence as far as purchasing a Vitamix is concerned, we hope this article has helped you make a decision and also helped answer the question “can you grind meat in a Vitamix?”. As always, I appreciate your comments and contributions.