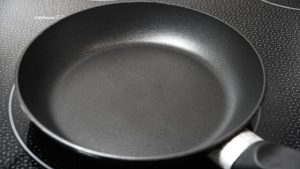 The big question if you are reading this article is, can you deep fry in a non-stick pan? With the level of health consciousness and the reports we keep seeing on the news and online, you want to be sure that the cookware you are using is safe.

The short answer to that question is, yes, you can deep fry in a nonstick pan and do it relatively safely. There are some precautions that you need to take to make sure that you stay as safe as possible. This article will take you through some of these potential risks and how to avert them.

Contents show
What are Non-Stick Pans Made Out Of?
The Dangers Associated with Teflon
Better Alternatives for Deep Frying
Wok
Cast Iron
Stainless Steel
Conclusion on Deepfrying in a nonstick pan
Related Posts

What are Non-Stick Pans Made Out Of?

It is used to coat both stovetop cooking utensils as well as ovenware. It’s the ability to withstand high temperatures and general robust nature.

The Dangers Associated with Teflon

Teflon has proven to be a really popular coating for making nonstick cookware ever since. However, as with almost everything, new discoveries have recently been made in scientific circles where it was discovered that Teflon gives off harmful chemicals when heated to 572 degrees Fahrenheit.

This shouldn’t be an immediate concern as deep-frying happens between 350 and 390 degrees meaning that the heat won’t rise up to levels deemed to be dangerous.

Though this is factual, there are instances when this can become a very real danger. A precaution you need to take to avoid this happening is to make sure that the heat output is controlled when you cook using non-stick cookware.

Pre-heating your pan for prolonged periods especially with no contents in it is a really bad idea. When Teflon is heated to the point of releasing these chemicals, they tend to linger in the air for extended periods of time.

They are generally regarded as not harmful to human beings in the quantities released but can be fatal to birds and other small pets.

If you have a pet bird in your house it could die. Teflon Coating Can Be Damaged When Scrubbed With the Wrong Material One of the mistakes that I’ve made with my Teflon cookware is to scrub it using a corrosive material.

I found that over time, the coating on my non stick pan began to gradually come off exposing the metal directly under the coating.

Using corrosive material will damage or remove the Teflon coating resulting in the risk of metal poisoning from the metal underneath the coating. There is a rare likelihood of this happening though but you need to be wary of this.

Generally speaking, you are safe deep frying in a nonstick pan but there are better alternatives out there that you can explore if you want to be worry-free as far as your cookware is concerned. Let’s look at some of these.

A Wok if a great alternative for deep frying. Not only is it much safer to cook with; it also great for deep frying. You use less oil because of the shape and you prevent splatter because it has deep sides. You definitely want to consider this.

Cast iron has a host of great properties. It evenly distributes heat meaning it cooks food evenly. It retains temperature better than all other cooking utensils which drop the temperature as soon as you add food. These are all the benefits over and above the fact that it is non-toxic. As a matter of fact, it is a great way to cook if you have an iron deficiency.

The last recommendation on this list is stainless steel. Stainless steel is great as cookware for deep frying. It is non-toxic and will get the job done.

Conclusion on Deepfrying in a nonstick pan

So, can you deep fry in a non-stick pan? Yes you definitely can. Just make sure that you operate at the right temperature around 350 degrees Fahrenheit and you’ll be good. Also make sure to take care of your non stick cookware by not using corrosive cleaning materials.