Skip to content
Home » Can You Deep Fry in a Crock Pot: Slow Cooker Usage 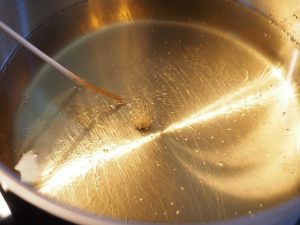 A crockpot is a must-have kitchen essential these days but can you deep fry in a crock pot? We will look at this in more detail in this article as we attempt to answer that question.

If you are like me and lead a pretty hectic life, a crockpot is a pretty handy gadget to have around the house. You can load your meal just before leaving for work in the morning and pretty much find a ready meal when you get back in the evening.

Besides the set and forget convenience that they offer, crock pots give you more nutritious meals and greater flavors.

This is because of the relatively lower temperatures when compared to conventional cooking, don’t break down the nutrients in the food being cooked.

The time it takes the meal to cook means that the flavors have more time to develop. We’ve all experienced how much better leftover food tastes.

This is because the different flavors would have had time to develop. It’s just like when you marinade food overnight before cooking it.

A crockpot gives you this “leftover food” effect from the very first time you cook a meal. Are you able to deep fry food in a crockpot though?

Contents show
Can you use a Crock Pot as a Deep Fryer?
Crock Pot French Fries and Wedges
Conclusion on deep frying on a slow cooker
Related Posts

Can you use a Crock Pot as a Deep Fryer?

To answer this question, let us look at how a crock pot generally functions. A crock pot is designed to get up to temperature very slowly and in some instances will take up to four hours to reach cooking temperature depending on your settings.

The idea of a crock pot is to just simmer the food until it is ready. The hottest it will get during the cooking process is a really light boil or simmer.

Food is cooked in this state for some hours and the end result is a tasty and nutritious meal. The time it takes the heat to rise up to a cooking temperature and the optimum heat levels make it such that it’s relatively safe to leave the crock pot cooking and come back eight to 12 hours later and find your meal ready.

You don’t get the dangers associated with pressure cookers, for example, where some have been reported to explode during cooking and in some instances to even cause bodily harm to the users or family members.

Based on the above explanation, it’s safe to assume that you cannot deep fry any foods in a slow cooker. The conditions required for deep frying simply cannot be reached.

It takes too long to get up to high temperatures and the temperatures, even at their peak, simply aren’t high enough. You could put forward that argument and no one would hold it against you.

In fact, I was resigned to that belief as well until I came across a recipe online that caught my attention.

It turns out that there are some ways in which you can do some form of deep fat frying in a crock pot. I was on Google looking for some slow cooker recipes and came across crock pot French fries.

They can be made in a slow cooker and generally take about 40 minutes to prepare. It wasn’t long after that I discovered a similar recipe for Potato wedges which can be deep-fried.

Another thing to note is that you need to use healthy oils like vegetable oil and olive oil because the oil tends to get more time to seep into the food and you want to make sure that the oil you are using is a healthy alternative.

These are the only recipes that I discovered where you can actually deep fry using a slow cooker. If there are any other recipes that you know, I would be glad to hear about them in the comments section below.

Conclusion on deep frying on a slow cooker

Generally speaking, you cannot deep fry in a crock pot. The conditions required for deep frying are not attainable in a slow cooker. Potatoes are the exception to this rule and you are able to