Skip to content
Home » Can You Boil Water In An Instant Pot? [How to Guide] 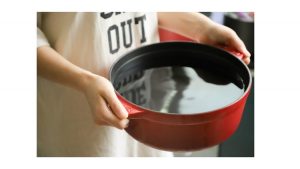 The real value of an Instant Pot lies in its versatility. This small kitchen gadget is highly pragmatic and can be used to perform a variety of tasks including cooking rice, soups, broths, making a cake, steaming veggies and more.

Yes, I understand that you might be skeptical about the performance of an instant pot when boiling liquid, but this is where its magic lies. An Instant Pot comes with a variety of preset programs that gives you the flexibility of choosing what and how to make your dishes.

Can you use an instant pot to boil water?

The answer to this is a yes, you can boil water in an instant pot but unlike boiling water using a regular stove, there’s a lot that happens when using an Instant Pot.

First things first, understand that the core functionality of an Instant Pot revolves around thermodynamics. Now, ordinarily, the cooking space in an Instant Pot features high atmospheric pressure, and as we know, higher pressure equates to higher boiling temperatures.

This is quite evident in the survival regions such as the high mountains where the boiling point of water becomes massively lower than the regular 100 degrees Celsius.

Now, back to our pot, when you boil water, it changes form from a liquid state to the more energetic gas molecules, what we commonly see as vapor.

Now, this is where the Instant Pot magic happens; since there’s the high gas pressure in the air, it prevents water from turning into a gaseous state as that would increase the gas pressure. And so, the more pressure, the hotter water has to evaporate.

If you’re wondering why we even use an Instant pot for boiling water, it’s because ordinarily, water cant becomes much hotter than 100 degrees Celsius.

And this is probably the reason why it’s always to steam your food with water vapor instead. Water vapor, on the other hand, can heat up to 800 degrees Celsius before the water molecules themselves disintegrate into individual hydrogen and oxygen molecule.

Now, coming back to our question, boiling water in an Instant pot is perfectly fine, provided you’re careful while removing the lid.

Boiling the water with a pot is particularly handy if your water hasn’t been purified and you want clean water for your baby or bathing an infant.

Boiling Water in an Instant Pot (Program to Use- Saute Function)

And as I had mentioned earlier, Instant Pot comes with a slew of programs for the different types of dishes. The Saute function is the more practical favorite when boiling water as it reduces the amount of water remaining after a pressurized cook.

How long does it take to boil water in an instant pot?

From my experience boiling water in instant pot is a lot slower when compared to using an electric kettle, on average it takes 4-8 minutes to boil water in an instant pot.

Conclusion on can you boil water in an instant pot

Fortunately, an Instant pot is a multi-functional kitchen appliance that can perform many different functions and boiling water is one of them, whether you want to boil water to cook pasta or want to make soup, don’t worry it is completely fine to do so in your instant pot.