Skip to content
Home » Can You Boil Water in a Rice Cooker? 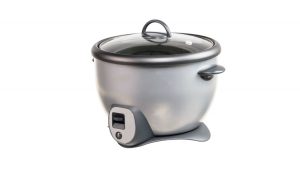 One thing that many do not know is that rice cookers are quite versatile other than the name. The cooking appliance is everything that you need in your kitchen to cook better rice faster.

The short answer is,  yes you can boil water in a Rice Cooker but you will need to clean the cooking appliance thoroughly if the water is meant for drinking.

Rice cooker is made from aluminum and the metal is regarded as safe for cooking. It does not flake at all when cooking and there is no chance of consuming heavy metals into the body.

Besides that, aluminum metal does not contain toxic substances that would harm your health. Therefore, you can go ahead and boil water in it. However, you will be expected to be extra careful when boiling water in the rice cooker.

The boiling water will spill and this might be risky in case it lands on your skin. Generally, dealing with electric instruments requires a lot of precautions when handling them since some are prone to dangers than others.

If you are staying in e hostel with limited cooking items then you can use a rice cooker for boiling water to prepare tea or coffee to ease your nerves during chilly days.

Can You Use Electric Rice Cooker to Boil Water?

Rice cooker is more versatile than the suggestion of the name. A lot of research through experiments have been done and it is a clear indicator of what they are capable of doing.

Electric rice cooker operates by heating water in the inner pot to produce steam suitable for cooking the content. This is an assuredly that it can boil water.

However, you will be required to consider the most complex form of electric rice cooker since it has a lot of settings as compared to the basic one.

You also note that the more the operating settings the higher the price. Therefore, you need to plan and budget for it.

The good news is that even the basic electric cooker can boil water up to a certain temperature before reverting to keep it normal. You can try out and have your own experience since this depends on the brand.

How Long Does It Take To Boil Water In A Rice Cooker?

The automatic kitchen appliance is designed for cooking rice. The procedure for cooking rice starts with boiling water. Now, how long does an electric cooker take to boil water?

Well, there are several things to put into consideration but basically, it takes about 20 to 25 minutes. Boiled water is considered safe for drinking and warm water is not safe at all.

Most bacteria do not survive beyond optimum body temperature. The chances of getting water-borne diseases after boiling water in an electric rice cooker for 20 minutes is quite minimal.

You should note that the power of heating elements varies from one brand to another. I recommend you pick a brand of your choice and try out to see the exact time it takes.

How Do You Boil Water In A Rice Cooker?

Boiling water in a rice cooker is no brainer. It is something that does not require any form of training or procedures since it is quite straight forward.

Final Thoughts on Boiling water in a Rice Cooker

Rice cooker is known for cooking rice only but this is not the case. Many rogue chefs have done experiments and it is proven to be a multipurpose appliance in the kitchen.

Can you boil water in a rice cooker? A hundred percent yes. The device is designed for boiling water until it evaporates.

Therefore, you can use the instrument for boiling water. Besides that, the kitchen appliance can be used to boil eggs and milk perfectly in case you do not have the pots at your disposal.

Use the comment section and feel free to share your experience when boiling water, eggs, and milk in the rice cooker.

Kitchen Mama Electric Can Opener: Open...
On Sale!Bestseller No. 5