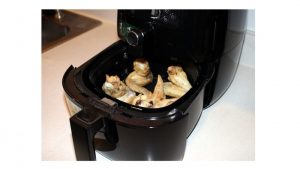 For all the rave reviews that air fryers receive, there are a few people who are still skeptical and if you are reading this article, you are most probably one of them.

Are air fryers toxic? Is there something that could be deemed dangerous or at least exercise caution over? Generally speaking, air fryers are pretty much safe to use and produce healthy food when compared to conventional frying methods which have been linked to various illnesses one of which is cancer.

They are a solution to a long-debated question of how we can prepare tasty, healthier food. Tasty and healthy food were not two words that fit in the same sentence.

Health food has long been associated with bland, boring food but not anymore. The air fryer now gives you the ability to enjoy tasty food which is also good for you.

How an Air Fryer Works

To answer the question “Are air fryers toxic?”, we need to look at exactly how they work. Air fryers are essentially mini convection ovens.

A convection oven, like any regular oven, has one or more heating elements that generate heat but with the addition of a fan that circulates this heat.

This leads to more evenly cooked food and faster cooking times. The air fryer has a heating element usually located on the inside part of the lid and a fan sits just above the element.

The fan blows the heat downwards onto the food. This method is just like any other oven cooking method but a lot more efficient and with better results most times.

The Good Things about Air Fryers

Air fryers don’t need the food to be dipped in fat as in conventional frying. You just need to apply a thin layer of oil with a brush and that’s it. You get that fried food taste but the food will be a lot healthier.

Here are some of the good things about using an air fryer:

The Bad Things about Air Fryers

Just like normal frying, air fryers let off oily fumes which cause health problems if breathed in over long periods but that being said, they are not as bad as what you get from regular frying.

Over time, these oily fumes can collect on surfaces. You want to make sure that there is sufficient ventilation in the kitchen and that nothing is blocking the air vents at the back of the air fryer.

It recommended that you leave at least 50cm of space between the vents and any surface.

Are there Possible Side Effects of Using Air Fryers

Even with all, it’s benefits, there are still a few side effects associated with air fryers. Frying food produces compounds known as acrylamides, polycyclic aromatic hydrocarbons and heterocyclic amines which come from cooking meat at very high temperatures.

Though the risk of these is relatively lower when you air fry, they are still produced albeit in smaller quantities. Some of these compounds have been known to cause cancer according to the National Cancer Institute.

Air fryers offer a safer, healthier alternative to conventional frying yet still giving you those amazing flavors that come with deep fat frying. That being said, there still are some associated risks that you need to be mindful of.